Admin Per Se/DMV Hearing – Set Aside.  Client was charged with DUI and REFUSAL of a chemical test subject to a one year driver’s license suspension.  Over the course of several 1-hour sessions of a DMV hearing in which the client and arresting officer testified, video recording of the stop, arrest and booking of my client were subpoenaed and introduced into evidence, the potential suspension against my client was “set aside” and driver’s license was reinstated. 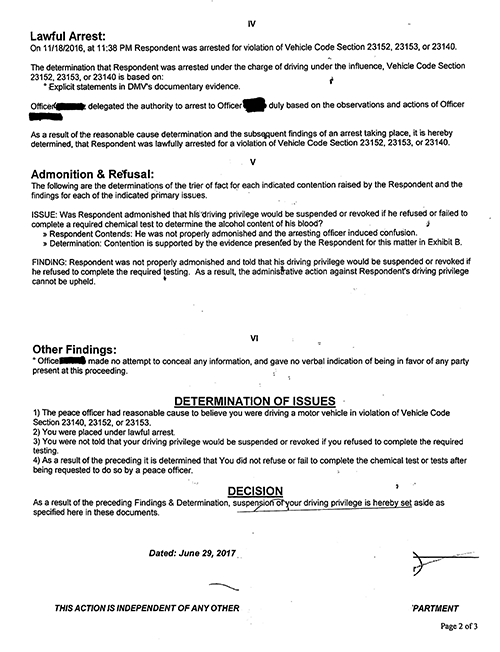 Criminal Charges filed – Several violations of the Los Angeles Municipal Code Proposition D ordinance regulating medical marijuana businesses. Under this section, a property owner may not permit the premises to be used for any medical marijuana activity, and an operator may not engage in the cultivation, possession, distribution or giving away of marijuana for medical purposes.

Potential Penalties – Violation of any section of the Los Angeles Municipal Code is a misdemeanor, punishable by six months in jail and/or a $1000.00 fine and a nuisance, subject to a daily civil penalty in the amount of $2500.00.

RESULTS – Entire case was dismissed against both clients after investigation proved that clients, the property owners, were unaware of nor reasonably would not have known of the illegal use of the premises by tenant and that said property was no longer being occupied and used illegally.

During an office meeting with the district attorney, compelling evidence, which led to a Diversion resolution, was presented to include but not limited to, client’s attendance in counseling, there were no photographs of injuries to the other party, contents of a 911 call by a neighbor revealed mitigating facts about the case and the client had never been arrested nor charged with a crime previously.

RESULTS – Client was given a Diversionary Grant by the district attorney to complete 26 domestic violence classes over a six month to earn a dismissal of the case.

Criminal Charges Filed – 1 count resisting, delaying or obstructing a peace officer in the discharge of their duties, 1 count of being drunk in public and 1 count of trespass.

Client had no prior criminal offenses and held a California Registered Nursing license.  After, obtaining and highlighting additional discovery such as the 911 call and belt recording from the time of arrest and presenting a packet of personal mitigating factors at a scheduled conference with the district attorney, a resolution was proposed to have client complete AA, anger management classes and perform 5 days of community labor during a brief continuance of client’s case in exchange for dismissal if client completed agreed-upon terms.

RESULTS – Client successfully completed all required conditions, and therefore was not convicted and client’s case was dismissed pursuant to the Diversionary Grant by the District Attorney.

RESULT – Entire case was dismissed after proof was filed with the City Prosecutor that the premises were leased to a new tenant.

RESULTS – Client resolved his case with a Plea to a Wobbler drug offense, 11366(a) of the Health and Safety Code, commonly referred to as essentially operating a “drug” house, 3 years of formal probation which was converted to informal probation and reduced to a misdemeanor after the completion of 45 days of Cal Trans.  Subsequently a motion was made for a return of the client’s cell phones and money which was granted by the court.

Petition to Seal and Destroy Record of Arrest was Granted after client was arrested for domestic violence. The district attorney declined to file charges but neither the arresting agency nor prosecutor would agree to sealing and destroying the arrest of the client. A formal motion and hearing was held before a judge in which the Petition to Seal and Destroy the client’s arrest from record was Granted. 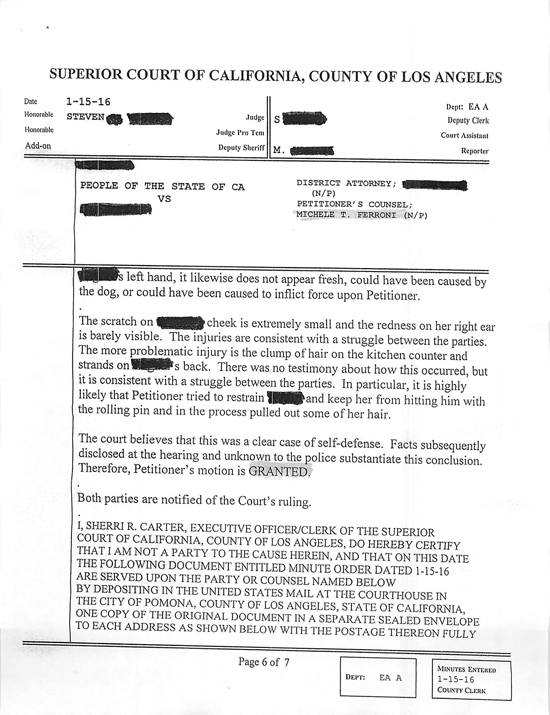 Admin Per Se/DMV Hearing – Set Aside.  Clients driver’s license reinstated without any license suspension after client arrested for suspicion of a DUI.  At the DMV hearing, the police officer testified, video recording of the stop and photos of client’s vehicle were introduced to attack the lawfulness of the stop resulting in the DMV reinstating clients driver’s license. 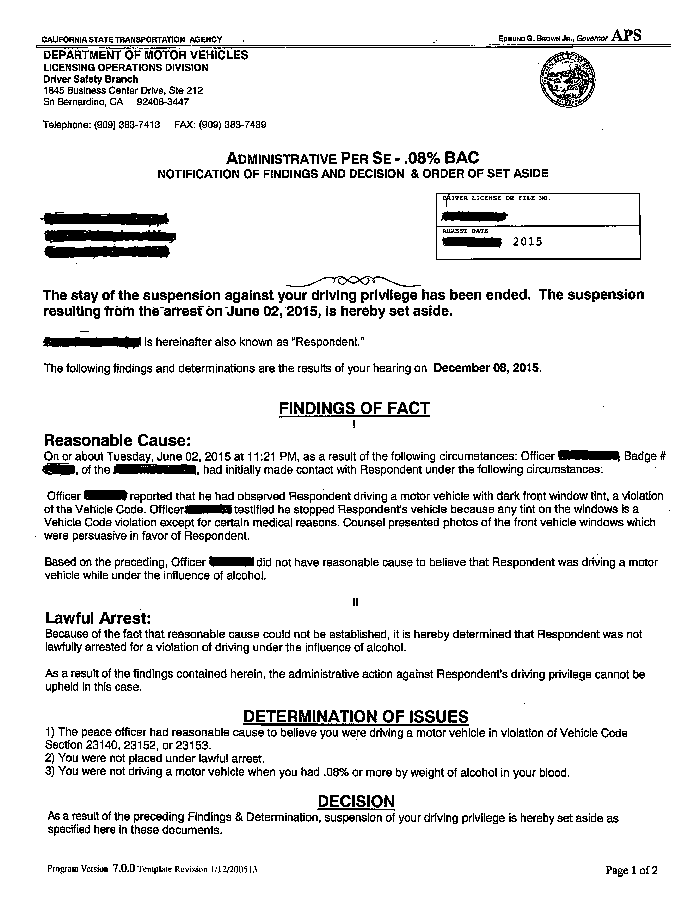 No criminal charges filed – Domestic Violence.  Met with the Victim on the case who did not

want charges filed against her husband. She had met with arresting agency and contacted the district attorney’s office but no avail.  Gathered mitigating information, circumstances of case and met with District Attorney who agreed not to filed any criminal charges.

Criminal charges filed – 2 counts of domestic violence as misdemeanors with prior battery convictions, false imprisonment and resisting arrest.  Client was represented by the public defender until the time of trial.  The best offer on the table was 45 days in county jail with other terms and conditions of probation.  Client retained me in the trial period.  After seeking additional discovery and researching the victim’s prior history, Client plead “no contest” to resisting arrest pursuant to 148(a)(1) of the Penal code and received 24 months of summary probation and was required to pay a fine of $150.00.

Criminal charges filed – Robbery with special allegation use of a deadly weapon, a knife.  Original offer on the case was for 4 years state prison.   A 995, Motion to dismiss for insufficient evidence based on the preliminary hearing transcript was filed,and we announced ready for trial, Case sent out to trial.  At time of trial, offer from D.A. was reduced to Brandishing a knife, misdemeanor , 90 days in jail which client accepted.

Criminal charges filed – Possession of Methamphetamine, Under the Influence with priors.

Motion to Suppress the Evidence pursuant to Penal Code 1538.5 Filed based on an unlawful detention/illegal search.  Motion Granted.  All Evidence Suppressed/Case Dismissed.

Criminal charges filed – Assault with a Deadly Weapon pursuant to 245(a)(1) of the Penal Code, felony strike.  After investigation and plea negotiations, charged reduced to non-strike Assault.  No jail time, no fine and reduce to a misdemeanor and dismiss after one year of probation.

Court, All charges Dismissed, client plead “no contest” to Speed Exhibition, 23109(c) of the Vehicle code and received 36 months summary probation and a fine.

RESULTS – Prosecutor amended complaint at arraignment to allege 23153 (a)(b) DUI with Injury as a felony.

I would recommend Michelle to anyone who needs an experienced criminal defense attorney. - Los Angeles Criminal Attorney

If you need a well rounded defense lawyer with experience I recommend going with Michelle. - Los Angeles DUI Attorney

Best defense lawyer in Pasadena! Michelle experience and her knowledge will help anyone in a criminal defense matter. - Orange County Criminal Attorney